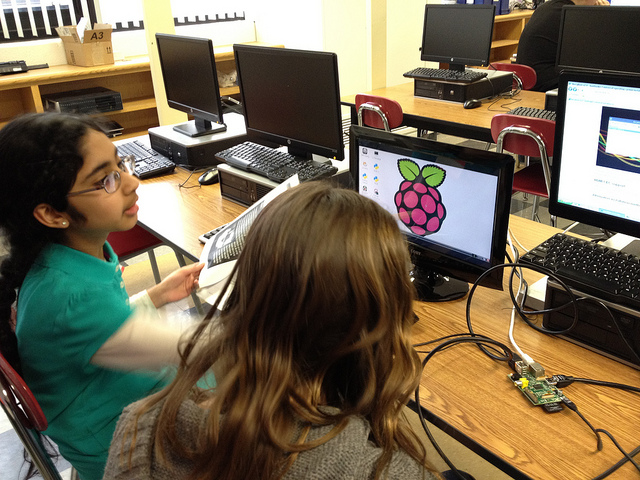 Another American Library Association Annual Conference has come and gone, and makerspaces were definitely among the hot topics. Ellen Gustafson, Rachel Goldberg, and I represented the Michigan Makers project at a poster session and chatted with lots of maker-oriented folks.

One thread that we heard repeatedly was a focus on community partnerships. Our project is a partnership between a university and a middle school. Nearly everyone we spoke with whose makerspace had developed beyond orientation or novelty status could point to an external funder, partner, collaborator, mentor, teacher, or guide. This was a really heartening discovery for us, as our work is deeply influenced by one another as well as by other makers, educators, and librarians in our community. It also confirms a hunch I have: that makerspaces developed in isolation by libraries can serve existing patrons, but it takes those external partnerships to extend services into new populations and communities.

Another trend I saw dealt with nomenclature. Some libraries are using terms like “digital media commons” or “digital media labs” instead of makerspace, and that strikes me as being useful in some communities where digital literacy is a big push. Ultimately, a term like “makerspace” may be more inclusive (for example, a knitter, origami aficionado, or comics creator may feel welcome in a makerspace and less so in a digtally-branded space) but less descriptive, and libraries need to know what term will best resonate with their communities.

I’m looking forward to hearing what my fellow MakerBridge bloggers have to report!

Reflections on Making at ALA

Library and School Makerspaces: Where to Start?

From the Archives: Reflections on Making at ALA