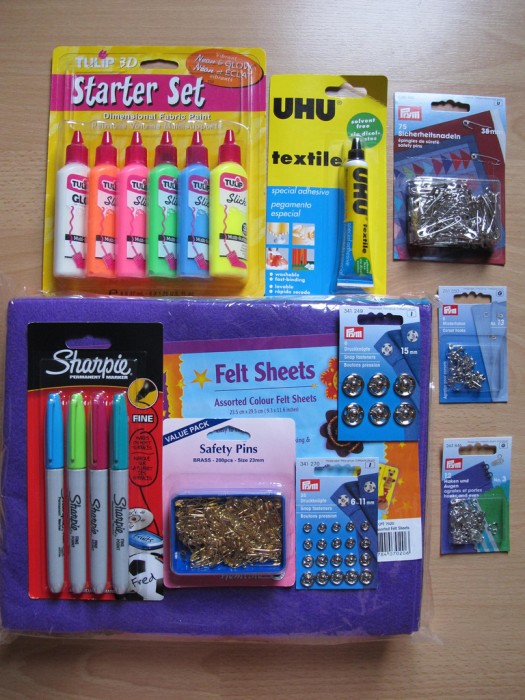 Over on the Library as Incubator Project blog, I was delighted to see a University of Michigan School of Information alum, Eden Rassette, blogging about what she called a “pop-up teen makerspace.” It’s a clear plastic box full of arts and crafts supplies.

This was designed based on feedback from my Teen Advisory Board: they wanted simple arts and crafts supplies, not technology or devices. Teens can use the kit in the teen area, and sometimes I bring it to programs for teens to use while they hang out. They made holiday cards with it, and do other things like repair notebooks and backpacks with the duct tape!

This desire to make with our hands — versus on a device — is something I continually see in our two Michigan Makers after-school makerspace projects, so this rings true to me. Eden also has students keep a tally of how often the box gets used.  Kids, either for a kind of self-soothing after a long day or merely to keep hands busy, which feels good — often choose activities like making stuff from our junk box or hand sewing, even when digital options are available. It’s a phenomenon I have yet to really make sense of.

According to this photo, Eden’s maker kit has been used dozens of times. How many of our library materials can we say have equally impressive circulation stats? And the items in the box — markers, duct tape, drawing pencils — cost little more than a good coffee table book. It’s a great way to support interests identified by members (as Lankes would call patrons) at a very low cost. We don’t need a grant to make a box like Eden’s. It’s easy to replicate, expand upon, and adjust over time. The materials are open-ended and conducive to many maker journeys. This is making that makes sense for libraries just starting out. I know the temptation is to run out and buy a 3D printer, but these early actions — and some children’s libraries have had kits like these for some time — help us test the water and see if we’re on the right track in responding to patron needs.

One commenter says that fundamentally, makerspaces are about transliteracy development. The commenter uses transliteracy to label some very powerful concepts, like using your ideas and creations to change the world. That’s heady stuff, but …

Unfortunately, this is not how transliteracy is formally defined. As delineated by Thomas et al, transliteracy is an umbrella term meant to define communication in digital and nondigital formats at any point throughout human history …  which means this maker box counts as a transliterate tool.

If we go back even further, to Liu’s Transliteracies Project, which inspired Thomas’s work, you see that he and his team were wrestling with the affordances and constraints that digital media could bring in terms of comprehension, primarily the tensions around what it means to “read” and “write” in a widely growing field of genres and formats. I’m not sure that is the same thing as making-for-social-change. Both concepts are important for librarans to grapple with.

I’m endlessly fascinated by how librarians take on the mantle of transliteracy thinking it means what we want it to mean. We seem to be looking, as a profession, for a term that encapsulates some powerful shifts in our professional and personal worlds. “Transliteracy” came along, and some saw it as a powerful life raft, a way to articulate this momentous path. It’s a valid impulse … my hunch is that “transliteracy” is our profession’s current placeholder term for a lot of impulses, shifts, movements, beliefs, and more, just as “information literacy” and “digital literacy” and “information fluency” have been in prior decades.

Dale Grover at Maker Works in Ann Arbor, Michigan, who has been in the maker community far longer than most of us in LibraryLand has, has my favorite definition:

I see the maker kit fulfilling all three. The box contains the tools; the librarian is there for support (the box has a note saying that if you need more supplies, let her know); the collection has additional resources for ideas for making; and the teens create the community.

What do you think?

Cross-posted to the Active Learning blog

Talking About Makerspaces at ALA

Fix It Yourself: Electronic Repair Spaces in the Library