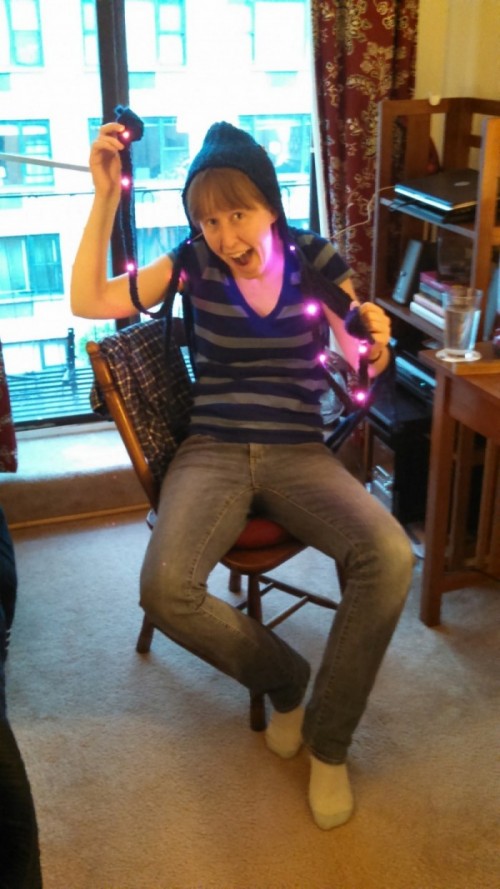 Hello world, and greetings from New York City!  I’ve been here on a brief vacation, and while that *has* involved normal(ish) New York City vacation things, it has also involved the penultimate step in a project that I began almost a year ago: the Sparkle Squid.  This is a project that began with me crocheting a hooded scarf with tentacles, based on Rhea Richardson’s Kraken of the Sea Scoofie, for a friend’s birthday.  Homemade gifts–always the best!

The project continued with that friend’s winter-holiday gift: All the pieces necessary to make Adafruit’s Sparkle Skirt.  Yep, that’s right, the completed gift was to be a hooded kraken scarf that lights up and responds to the movement of its wearer.  Awesome!

It should probably be noted at this point that although I have played a little bit with Arduino since last I posted about what I’m making, I haven’t exactly done *much* with Arduino, and I don’t think I’ve touched it at all in the past six months.  Since my knowledge of electrical circuits still leaves a lot to be desired, this was something of an aspirational project… and that probably explains much of why it has been going the way it’s been going.

You see, this is the second time I’ve come to New York City to spend a weekend visiting my friend and working on the Sparkle Squid, and it’s only today that I have anything to show for it.  The first time I was here, I learned two valuable lessons that I should have already known, but apparently had forgotten:  1) READ THE DIRECTIONS.  Read ALL the directions.  Read them closely, including the “For more information” bits that you might think you can skip.  Also, 2) Never, ever begin a project at the high end of your skillset when you are exhausted.

If you haven’t guessed it already… I spent much of that weekend agonizing over stitching in circuits and LEDs, only to rip it all right back out again and start over.  And over.  And over.  On the bright side, I stopped worrying so much that I was going to fry the FLORA that runs the Sparkle Squid.  If that were going to happen, I’m reasonably certain it would have happened very early on.  Being relieved of that worry freed me up to mess around more and see what (if anything) worked.  Unfortunately, at the end of the first weekend, what worked could be summed up like this: Nothing (except maybe the FLORA drivers we installed on my friend’s computer–but we weren’t actually sure about that).

This weekend, I returned to NYC and the completely non-functional Sparkle Squid.  The making festivities began with some brief attempts to salvage the work of the first weekend, before ripping it all out so that we could start over.  This time, we payed attention to things like, “You should check your work with a multimeter as you go.”  That’s actually a third thing I’ve used on this project: 3) Checking continuity and voltage with my handy, new multimeter. 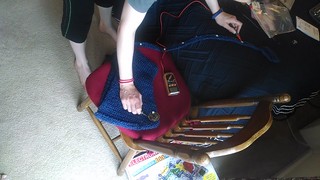 We also did a much better job this weekend with reading the directions (although one not-reading-enough incident led to further ripping out that set us back an hour or two).

The end result?  The Sparkle Squid does not yet have the accelerometer attached to it, but the circuit works, the LEDs light up, and I am entirely too excited about this thing.  Take a look at some video of it in action below!