This afternoon I celebrated the last day of my long weekend by making a light theremin.  “A light theremin?” you ask, “What’s that?”  I’m so glad you asked! 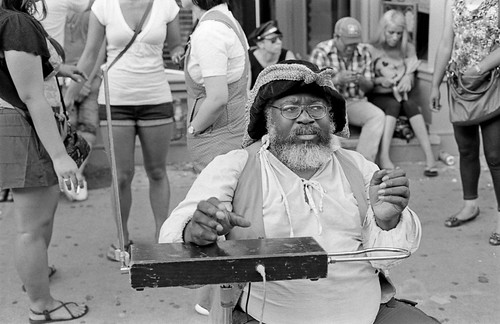 A theremin is that electronic instrument that old horror movies used to make those spooky ooo-ooooo-ooooooo noises. It’s also a really cool instrument to watch and listen to someone play. Here’s a TED Talk in which Pamelia Kurstin performs some songs on theremin and talks a bit about the instrument’s history (the history bit is around 10:46).  And here’s another interesting factoid about the theremin that I can’t leave out, band geek that I am: Shostakovich wrote for the theremin! Who knew? Check out this clip from the score of Odna.

A light theremin is a theremin controlled by a photoresistor, instead of the musician’s proximity to two antennas.  It’s one of the projects whose pieces and directions came in my Arduino Starter Kit, and it is possibly my favorite project yet. Because there’s only one controller, my light theremin doesn’t have volume control the way a real theremin does. That sounds like a project for another day! Until then, check out some video of my theremin, with my apologies for giving you virtuoso theremin performances in the earlier links and then my own unmusical playing here.

This was a pretty easy Arduino project to set up. It’s not much more than a photoresistor to let me control things by moving my hand, and a piezo to make the noise. That being said, there’s plenty going on here that could be fun to unpack in a classroom. There are the obvious things: Is your class learning about circuits? About pitch and frequency? About computer programming? There’s also at least one less obvious thing: Is your class learning about ratios? There’s a mapping function involved in the programming that lets you calibrate your theremin so that you can produce the range of sounds you want to produce, even if you’re playing your theremin in a brighter or darker space.

And how about combining some of those subject areas? Tie in a history of music lesson with what was going on in the world of science by talking about how Shostakovich was an early adopter of the recently invented theremin. Tie in some Cold War history by talking about how Theremin (the inventor) worked for the KGB, at first involuntarily, and ended up also inventing a listening device that effectively bugged a U.S. embassy for years. Spies make every history lesson more fun, and you have to admit that the gadgets are often the coolest part.

I wish the various places I learned history had tied things together that way; I still have trouble figuring out where different periods of literary history that I learned in English class map to the stuff I learned in history class! It just sort of all slides around loose in my head, with nothing to anchor it to any particular context. Not to mention, as a recent NPR story puts it, “Without some form of emotional involvement, the past is a snore.”

So anyway–the light theremin! Gateway to discussions of circuits, pitch and frequency, music history, and spies. Has anyone ever played an actual theremin? I’m kind of itching to get my hands on one, now.