1. Lots of white guys on stage

Ok, I didn’t actually see all of them; I counted them up on the website.  There were 15 time slots on Saturday, the day I was there.  On the first stage listed, the schedule for Saturday listed one woman who had a session of her own.  Two other sessions included names of co-presenters who seem likely to be women.  The co-presenting women didn’t get their pictures included by the session names, although their presentation partners did.  Also, it’s a *very* white list, when you scroll through the pictures.

“But wait!” you say, “There are other stages!”  Why yes, there are.  Still overwhelmingly white, but at least women saw some representation… on the Education stage.  And no, there’s nothing wrong with women as educators.  As a librarian, I put myself into that category.  But doesn’t that feel just a *little* bit stereotypical to anyone else out there, that that’s the only stage showing strong female representation?

And before anyone suggests that it’s easier to find good male speakers for making-related topics, I would like to say that the one session I went to, which was presented by a white guy, was easily the least interesting part of my day at Maker Faire.  One of the people I was with almost fell asleep.  You can’t tell me that there weren’t any more-diverse speakers available who would have been at least that good.  I’m just not buying it.  Make, you can do better!

2. Lots of people not onstage, who were having a blast

All the wonderful things I’ve come to expect of Maker Faire were there–they just weren’t onstage.  I saw all kinds of people making and showing off all kinds of cool things.  Needle felting, making puppets, taking apart computers, learning to solder or pick locks, showing off robots and t-shirts and full-body controllers for video games, you name it.

I got to talk to some FeMaidens, who were there showing off their Aerial Assistrobot.  I left them with intense jealousy that I can’t list robotics club among the things I did in high school. 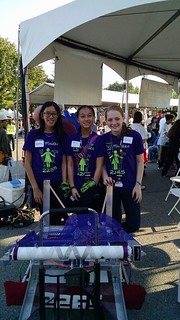 I also got to see cool new projects, like SAM, which strikes me as a more versatile and coding-friendly version of LittleBits. Plus there was Kit Rex. I think they said they will be putting up their dinosaur costume on Kickstarter soon, and that is just plain fun.  Who doesn’t want their own cardboard dinosaur costume?? 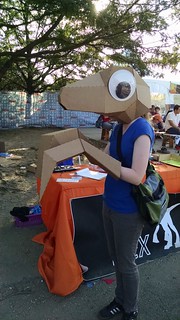 3. Lots of people to connect to

We’re always saying on MakerBridge that educators should reach out to the people they meet at events like World Maker Faire.  It’s worth repeating.  But what I especially love is that even if I’m too shy to approach someone in person (or, for that matter, can’t make it to the Maker Faire at all!) I can still find the conversation on Twitter and identify new people to follow who are doing and talking about interesting things.  For me, at least, it’s a lot easier to bring myself to tweet at a stranger than it is to strike up a conversation in person!

Was anyone else at World Maker Faire, or one of the other Maker Faires that have been going on in the past couple weeks?  Did you see anything especially interesting?

From the Archives: A Day at Maker Faire Detroit