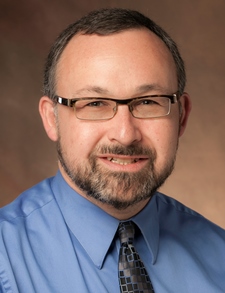 This week’s post is an inteview with John Burke, Library Director and Principal Librarian at Gardner-Harvey Library at Miami University Middletown. John is the author of Makerspaces: A Practical Guide for Librarians, has conducted a survey on makerspaces in libraries, and has created a number of other resources and presentations on the topic of makerspaces and libraries. Be sure to visit his website to find out more.

MakerBridge: Tell us a little bit about your day job and how it led you to being interested in writing this book.

I am the library director for a small academic library.  In that role, I end up involved in all sorts of different library activities, including a lot of technology support for patrons and staff.  My daily work keeps me interested in tracking and writing about library technologies, and that is how I came across makerspaces (in their various forms).  I talked about it with an editor I had worked with on previous books, and the opportunity to write about makerspaces came together.

You interviewed a wide array of library maker leaders for the book. What common threads did you find in what they shared?

Something that the majority of the library makers expressed to me was the importance of getting their community of makers and prospective makers involved in the planning process as early as possible.  They believed that would lead to real expressions of interest in particular making tools or media, rather than trying to fit people into a model created by the library.  As I dug into the motivations of the library makers further, I found emphases on encouraging patron learning, modeling and inspiring collaboration among community members, and a desire to provide people with access to equipment and skill training that they could not get on their own. The makerspaces were all very different in terms of the community served or the exact makeup of equipment or activities, but these goals were found throughout.

Can you tell us about any particular makerspaces that you see as particularly well-connected to their communities?

I’ll mention two makerspaces that stand out and that also have distinct ideas of who they hope to reach.  The Richland Public Library in Columbia, SC, is very focused on serving teens and providing them with digital and physical making opportunities.  They have done a great job of involving groups from beyond the library in providing equipment and mentoring (a technology company and a theatre group) and then also doing extensive outreach in the local schools and networking with teachers.

The Johnson County Public Library in Overland Park, KS, began its making activities with a focus on serving small businesses and people working from home with the digital technologies they need to communicate their ideas through websites, high quality images, and combined audio, text, and video projects.  Once they started working with those patrons, they realized that other audiences could use these and other technologies.  They opened up their initial media lab to other users, and added 3D printing, electronics, and other forms of making to connect with a wide array of ages and backgrounds.  The main library was their primary setting when they started, and now they are responding to demands to bring mobile making activities out into their branches and reach even further into the community.

Is there anything that seemed to be a common “rookie error” among library makerspaces? If so, what was it, and what did people learn from it?

I think there is a great urge when you start a makerspace to enable many types of making at once, which in theory will lead to lots of interesting collaborations.  This can lead to libraries buying a “set” of making tools and equipment, without first seeing if anyone in their community is really interested in using Tool X.  Libraries need to realize that there is not a required list of making technologies that you have to have in order to be a makerspace.  They need to support the making and discovery activities of their community, and follow community interests.  Some things can be bought to inspire people to attempt a given type of making, but there is not a need to overwhelm the community or the library with a woodshop or a recording studio that are not in demand.

How has this research impacted your day job at Miami?

When I started the book, I was interested in the idea of library makerspaces, but I could not see where this activity fit into my daily work.  In fact, while I was extremely curious to know what libraries were providing for people to make, I was not sure I could see a makerspace fitting into my own library.  I learned a lot from a large number of very kind and sharing makers who took time to talk with me, and that led me to being convinced that making was something I should offer to my campus community.  There has been interest from students, faculty, and staff, and we are growing our making offerings.

President Obama has indicated that making could be a way to revitalize American manufacturing. Do you see this promise unfolding in the libraries you studied? If so, how? If not, what would it take to make it happen?

I think that the maker movement and access to making skills and technology in libraries can really inspire people to learn how to make things with their own hands and how to design items and products.  I am not sure that this will lead to mass manufacturing efforts, or lead today’s middle schooler to become tomorrow’s robotics operator or engineer.  I can imagine makerspaces creating the opportunity for lots of smaller manufacturing operations, given the decreasing costs of some automated making tools (like 3D printers or laser cutters).  I am also interested to see how people’s abilities to design and make their own objects might alter the current mass-produced culture.

Where do you hope the making-in-libraries movement will be in five years?

I hope that library makerspaces will very much be the norm, with making activities seen as an expected service in libraries.  To get there librarians and makers will need to keep sharing their ideas and approaches to guide and inspire new people to get their libraries involved.  More than that, I hope that the opportunity for making continues to bring more and more individuals and groups into the library and let us see the amazing things they create.

Makerspaces Can Coexist in the Library