When I first moved to Champaign-Urbana, I had no idea there would be so much interest in the Maker Movement on campus and in the community. There are at least two self-proclaimed makerspaces on the University of Illinois flagship campus, the CU Community FabLab, and the Illinois MakerLab.

I haven’t yet been able to visit the CU Community FabLab, I finally made it to the Illinois MakerLab. Earlier in the year, they announced the launch of their Certified Maker program. If an individual attends all four of their offered workshops on 3D printing, the individual would be awarded a ‘3D Printing Certificate’. Due to scheduling conflicts I’ve only been able to attend one session, conveniently, “Workshop 1: 3D Printing”.

The Illinois MakerLab is located in the Business Instructional Facility, which is why their tagline is “The world’s first business school 3D printing lab”. The instructors were two male undergraduate engineering students, while the majority of the audience (granted, there were maybe about eight of us) were women from assorted backgrounds.  Besides myself, two of the other participants were staff, and I assumed that the rest were students from assorted departmental backgrounds.

I found the session interesting, although I was not all that surprised considering the MakerLab’s location, because it was taught from the perspective of an engineering/prototyping/business perspective. I’ve spent so much time reading and thinking about 3D printing and the Maker Movement from the perspective of libraries and K-12 students, I almost forgot that the roots of 3D printing, or additive manufacturing, are actually in industry.

After the requisite history of 3D printing, safety precautions, and processes, we were turned loose onto Thingiverse to pick a design to print. The woman next to me settled on a TARDIS lightswitch cover, which was so cool I had to show the design here: 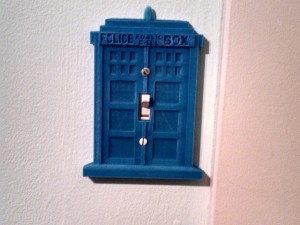 I, in true librarian fashion, chose to print ‘cuddling cats’: 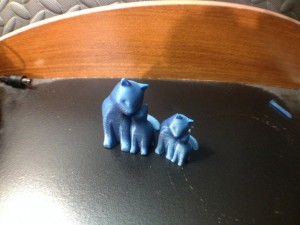 3D printing can evidently take some time. It was supposed to take about 90 minutes for the Makerbot 2 to print my design. I haven’t been able to pick up the finished product due to time, but I will update this post as soon as I do! I had a huge amount of fun learning about additive manufacturing and trawling around Thingiverse. I’m hoping to sign up for the additional workshops to learn more about 3D scanning and design. Stay tuned for more!

Questions or comments? Let us know in the comment section below, or find us on twitter @makerbridge.