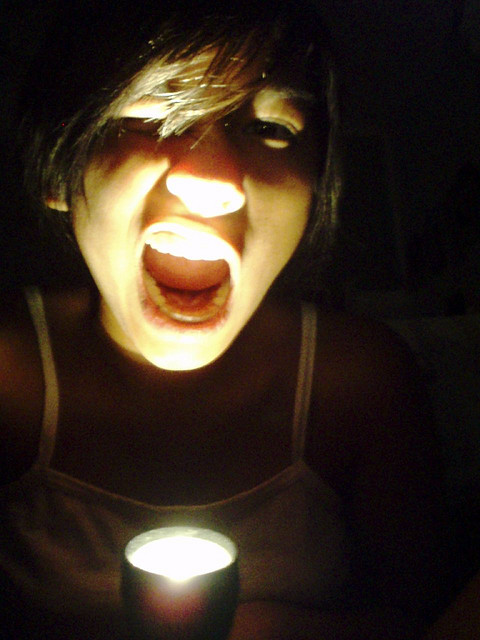 Last week, four classes of second graders–a total of 100 seven and eight year olds–came to visit my library.  I was in charge of demoing our MakerBot for three of those classes, and talking about the kinds of things college students make and libraries help them make.  Usually, 3D-printer demos involve actually, you know, demoing the 3D printer.  This time?  This time, that was not a possibility, because the power was out.  3D-printer demo in the dark!

So how did I survive?  I made a last-minute adjustment to my lesson plan that actually made the lesson better.  I couldn’t demo the printer, and I didn’t have any successful, finished objects on hand to show off to the kids–but I had a whole box of failed prints sitting there waiting for a chance to be useful.

Adult makers are always talking about how one of the great things about making is how it teaches you to embrace and learn from failure.  Why not actually include that in what I was saying to these second graders?  So I did, and *wow* did those second graders get into it!

We started by talking about all the things they like to make, and they told me about constructing forts, about sewing, about making wooden cars, drawing and painting, building things with Legos, cooking, making books, filming videos–you name it, these kids were into making it.  What’s more, they were thrilled that someone was asking them about what they like to make.  Hands shot into the air, and several kids were too excited to sit still.

They were a little bit less sure when I asked them what kinds of things they thought college students make, but when they started hearing that college students get to make a lot of those things, too, they got interested again.  Then we talked about the 3D printer, and some of the things college students use it to make, and how it works–and how sometimes it doesn’t work.  “How many of you don’t always get it right the first time when you make something?” I asked, and every hand went straight into the air.  “Me neither!  And neither do college students, or even their professors.  No one gets everything right on the first try, but that doesn’t mean we can’t do it.  It just means we have to keep trying.”

Then we talked about all their cool ideas for stuff to 3D print, and in the end, all three classes had to be cut off while they were still going strong, so that they could make it to their next sessions.  A couple of kids complained that they didn’t want to go, which is the comment that every teacher/librarian dreams of hearing.  And they really said it!  Unprompted!  I’m a lot more used to working with college students than second graders, but this was fun!

If they were that excited just to talk about making stuff, I can only imagine how excited they would have been to actually make something.  Do any of you have any go-to maker lesson plans for days when the power goes out and you don’t have much in the way of supplies on hand?  Leave a comment, or hit up @makerbridge on Twitter!

One Expert Is Never Enough: Surviving When Your 3d-Printing Expert Leaves

3D Printing at the Illinois MakerLab