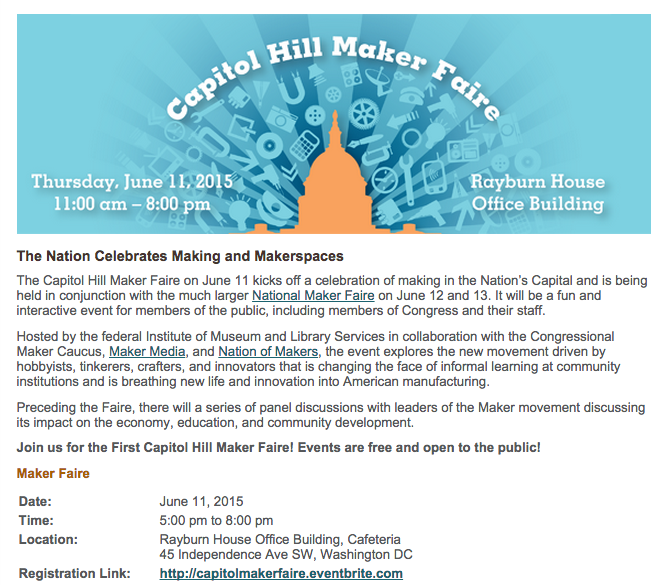 Along with several other library programs, Michigan Makers has received a delightful invitation from the Institute of Museum and Library Services and the Congressional Maker Caucus to exhibit at the first Capitol Hill Maker Faire, so MSI student Amber Lovett and I are flying there soon this week.

Did you know there was such a thing as a Congressional Maker Caucus? Indeed! It was announced in February 2014 with these goals:

Congressman Mark Takano joined today with Congressmen Steve Stivers, Tim Ryan, and Mick Mulvaney to co-found the Congressional Maker Caucus, which will help promote America’s growing “maker” economy, including the use of new technologies with the potential for revolutionizing American manufacturing and lowering barriers to entrepreneurship.
Through the use of maker technologies such as desktop 3D printers, CNC machines, and consumer grade laser cutting machines, already-established businesses can explore new product lines, add employees, and attract new customers. Do-it-yourself entrepreneurs will also have more opportunity to find their niche in the manufacturing sector and build new businesses…
The House Maker Caucus will provide a greater voice in Congress to those individual (sic) and companies who are a part of this growing movement.
“For the past century, innovation and entrepreneurship has helped propel the American economy,” said Congressman Takano, “but with global competition increasing, developing new industries right here in the United States could not be more important. The Congressional Makers Caucus looks to harness the power of America’s best and brightest and advocate for America’s maker community in the halls of Congress…”
“Experts tell us that the economy of making things is five times larger than the digital economy and the Maker Caucus will help us advance the right policies to keep our manufacturing sector thriving,” said Congressman Ryan. “I am happy to join my colleagues Congressmen Stivers, Takano and Mulvaney in working on behalf of these new industries that will transform the way we make things in the United States—as well as bring in large number of new entrepreneurs into the process” …
Congressman Mulvaney added, “I’m proud to join my colleagues in the creation of the Congressional Maker Caucus.  It’s important that we as legislators recognize the value of innovation right here in America, and I look forward to advocating for this growing industry in Washington.”
Maker technologies, such as 3D printers, are already being used to build custom dental fittings and crowns; custom prosthetics; and electrical circuits. Bio 3-D printers can print a layer of a patient’s own cells which can grow to organs; bladders and kidneys have already been demonstrated in labs.

If you’ll be in the DC area this week, we hope you’ll stop by. We can’t wait to spend time with our colleagues coming to DC from around the country! We’ll be visiting the National Maker Faire the next day!

A Chat With John Burke, Author Of Makerspaces: A Practical Guide For Librarians