HUE Animation Studio is a stop motion animation kit that sells for about $70. MakerBridge was sent a free kit for review purposes.

The HUE Animation Kit is a complete package of what you need to make a simple stop motion video (excluding a computer). The kit comes with an HD camera, a base for the camera, a cable to connect the camera to your computer, a CD containing the accompanying software, and a book with some basic instructions and ideas for videos. 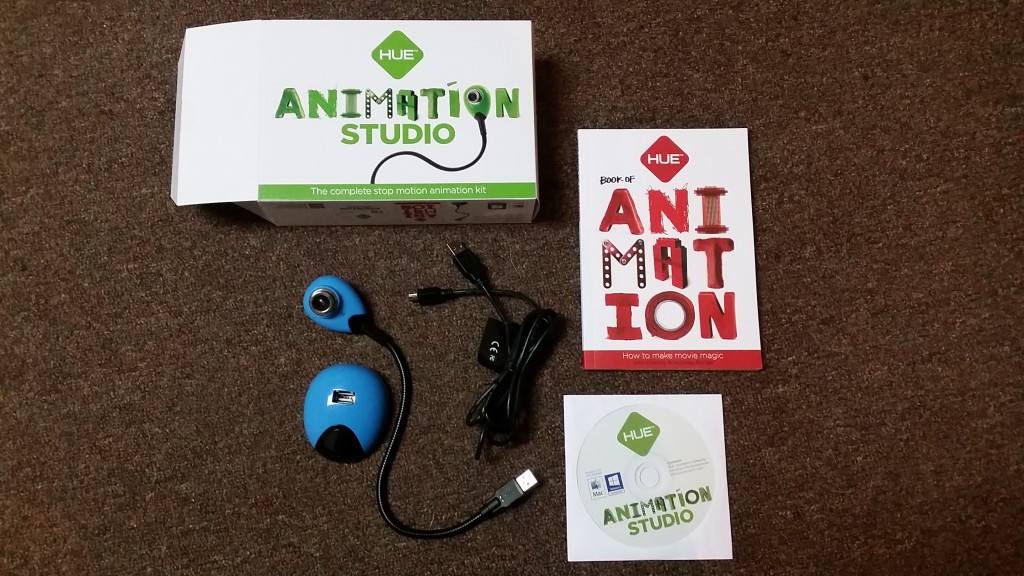 In addition to the software, the CD includes extras, such as backgrounds, sounds effects, and print-out characters you can use for your videos. It would be entirely possible to get started making a video with nothing more than this kit and a computer where you can install the software and connect the camera. There are also sample videos on the disc that demonstrate the ideas and suggestions contained in the included book.

Once you unpack the box, the kit is very much plug-and-play. It took me just a few minutes to install the software, plug in the camera, and make a very quick test video to try out some of the features. I did this in between patrons while staffing the reference desk, so that should give you a sense of how quick it was to get going.

A few things to think about when you’re setting up for your movie are where you’ll want to place your objects/figures, how you need to twist the camera in order to see them well, and how much light you have. It took me a little practice to figure out how the camera was going to see things and what that meant for how I should place my objects. The camera does have a fairly bendable neck, though, and you can see a preview of its view in the software, so you can use trial and error until you’ve got a good setup. Since lighting isn’t a part of the kit, you’ll want to make sure you’re in a location with good light, or else add some light of your own. I used my cell phone’s flashlight app to help out when I was making the video below.

When you’re all ready to start creating, it’s a simple process of clicking a button in the software to snap a picture, moving your object slightly, snapping another picture, moving your object slightly, and so on until you’re finished. The software layout shows your current view, the previous snapshot, and the timeline of your movie. I found it intuitive to do things like delete a frame or even reorganize frames by dragging and dropping.

To help in creating your movies, the software also includes a feature called onionskinning. This means you can see a faint outline of your previous frame on top of the camera’s current view, which allows you to carefully set up your next shot and maintain the flow of movement.

The editing options the software provides are a mixed bag. In my video, I was easily able to group a bunch of frames, duplicate the whole thing, then reverse them, so my figure could walk backwards to its starting position without me needing to retake all those photos individually.This is the kind of thing the software does well. There are also editing options that let you overlay text, drawn lines, and shapes; this type of editing is much more limited. As far as I could tell, you can’t select a font or edit/move text and shapes once they’re placed, and you’re fairly limited in terms of colors and shapes you can select. It’s helpful if you want to overlay something quick and simple, but I wouldn’t try to add any complex special effects this way.

When you’re finished, you can export your movie as an .mov or .mp4; there’s also an option to share to YouTube, which will ask for your YouTube credentials, then upload it.

Both videos in this post were made with just the basic frame capture mode, but there are actually a couple other modes to the software:

Have you used the HUE Animation Kit or another stop motion kit? What kind of stop motion projects have you created? Share your comments below or tweet at us we’d love to hear from you!