I wasn’t planning on learning to weave this summer, but when you suddenly acquire a loom… well, how can any yarn lover resist weaving?  This is my big chance to use up all those odds and ends of yarn that have accumulated from crocheting and knitting projects.  It’s also a good way to do something productive with yarn that has a tendency to split, since splitting yarn is annoying to knit or crochet with.  Hooray for weaving!

Here’s what I’ve learned about weaving so far:

Be Prepared to Learn New Words

Weaving has a lot more vocabulary to it than I had expected to need right off the bat.  You warp the loom, use the heddle to create a shed, pass your weft (on a shuttle) through the shed, beat your weaving with a reed that has a certain number of dents… and as far as I can tell, this is just the beginning.  Hopefully I’ve used my new words properly!  If you’re going to make a serious study of weaving (or be able to understand much of what gets said about weaving in various forums or publications), you’re going to need to learn the vocabulary.

There are, as far as I can tell, approximately a zillion different types of loom.  Each of them has strengths and weaknesses (including size and price point).  My loom is a rigid-heddle loom; its brand name is Cricket Loom.  There are also back strap looms, ground looms, vertical looms, inkle looms, and a great many more.  If you want to go full on industrial, there are even Jacquard Looms, which turn out to be important in the history of computer science.  No joke–this is where punchcard programming came from.  Weaving for the win!

You’ll want to figure out exactly what kind of weaving you’re looking to do before you purchase a loom.  Just want to make thin straps or ribbons?  Maybe you want an inkle loom.  For something wider, but relatively simple, you might consider a rigid heddle loom like mine.  My loom can make fabric up to 15 inches wide, and it’s a nice, small size, which makes it easier to store.  If you want to be able to do more complex patterns in your weaving, though, you’ll need to find another loom that can handle those patterns.

Warping the Loom is the Hardest Part 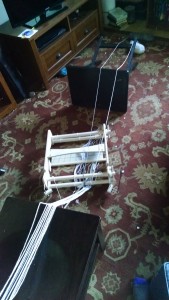 Ok, this might not be true for experienced weavers, but for the rest of us–warping the loom is tricky.  This is the step where you set up the yarn that runs the length of your project, getting it onto the loom properly so that the loom will function and you can weave cloth.  My loom came with directions for “direct warping,” which is supposed to be a very easy method: you just loop the yarn around a bar on the back of your loom, run it through your heddle/reed, loop it around a peg you clamped at an appropriate distance from your loom (depending on how long the project will be), and run the yarn back again.

I ran into some problems because I didn’t have surfaces I could clamp my loom and warping peg to at a suitable distance from each other.  The small end table I tried to use tipped over from the tension of the warp.  Eventually I had to move a loaded bookshelf in front of the end table to hold it upright and in place.

Warping was not an exciting or glamorous process, and I was pretty frustrated long before I completed it.  If you’re going to try to teach weaving in a makerspace or class, I think you might have more luck starting people on an already warped loom, and then teaching them to warp for themselves after they’re hooked on weaving.  An added bonus to doing things that way is that you could conceivably buy only one loom, warp it and get it ready to go, and then just have it available to anyone who wanted to weave on it for a while. 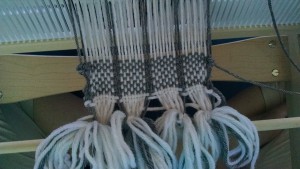 Probably this should go without saying, but making your weaving look good takes practice.  Getting your selvage (the left and right sides) even takes some figuring out, as does figuring out how hard to beat your weaving.  If you’re inconsistent, your fabric will show the inconsistencies.  And probably there’s a lot more to all of this that I’ve yet to discover!  Will my fabric still look good when it’s no longer stretched on the loom?  My fingers are crossed.

You Can Build Your Own Loom

Looking for an easy loom to build?  Try a loom built out of a cardboard box.

Looking to exercise your woodworking skills?  My library has a copy of this book that claims it’s not hard to build a loom.

Want that level of complexity, but without the woodworking?  Apparently you can build a loom out of PVC pipe.

I’ve been having a lot of fun with weaving so far.  It goes much faster than knitting, and I love the texture of woven fabric.  I’ve also been enjoying learning about the history of weaving–I’m currently reading 5,000 Years of Textiles.  While the whole book isn’t just about weaving (there are other sorts of textiles, after all), I’ve found it fascinating to learn about the myriad ways people around the world found to weave cloth, and how ancient a lot of techniques really are!

Have you ever woven anything, or tried making a cardboard loom?  Hit me up in the comments, or tweet @makerbridge.  I’d love to hear your experiences!

Not just knitting or crochet

PACE-ing yourself when planning maker learning