Over the summer, Sharona held some brainstorming events with faculty and staff to see what directions they wanted our maker events to go in.  One idea that came out of those sessions was the idea of a maker “track.”  These would be scheduled series of meetings people could sign up for, that would allow participants to move from learning the very basics of a topic/skill into applying those basics to a project.

Last month, I led the first of those tracks to be held in our library: my Learn to Crochet a Scarf track.  Here’s how it went down:

I though that four sessions would be a good number for teaching people to crochet a scarf.  I figured that teaching them to chain, single crochet, and double crochet would take up the first two sessions.  The last two sessions could provide catchup time for anyone who was struggling, question-answering time for anyone who was feeling uncertain, and social crocheting time for the rest of us.  I checked my work calendar for a time I could do four weeks in a row and that seemed unlikely to conflict with most classes; I ended up choosing Wednesdays at 4:15.

I made a flyer in Canva, and we posted it around the library and on social media. 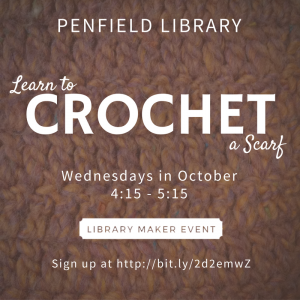 Anyone who followed the bitly link saw a Google Form asking for their name, email address, whether they’d crocheted before (with a note that it wasn’t necessary, but we were curious), and whether or not they’d like to receive emails about similar events in the future.  There were also some details going over the times/dates again, making it clear that we would be providing supplies, and establishing that anyone could sign up but preference would be given to people affiliated with SUNY Oswego. 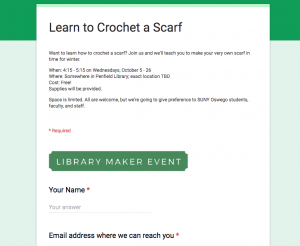 I got nine people signed up over the course of a week or two, which was where I capped it.  Most of my new crocheters turned out to be staff, but a few students signed up too.  I had another librarian and a library staff member who had agreed to come to the first session to help me get everyone started.  Another student had emailed seemingly out of the blue asking if she could help teach, too, since she loves crocheting so much.  Given that level of support, I figured that nine students was about what I could handle (and about all the conference room I’d booked could hold).

I had read that it’s easier to start people on crocheting if you give them pre-worked swatches and have them add some single crochet to that before you take them back and teach them to start their own project from scratch, so I decided to try that out.  Nine students and three or four crochet “experts” was going to be a lot going on in that first session; anything that would make life easier seemed worth a shot.

That first class meeting was insanity!  The conference room we were in was packed and very warm, so the fans were going and it was noisy.  I gave everyone a crochet swatch to work on and tried to demonstrate the very basics of single crochet for them, but I couldn’t hold the group’s attention long enough to do that.  We broke into groups and I relied on my assistants a lot more than I had intended to.  Fortunately they were all fantastic about this and really stepped up.

I hadn’t expected to have two left-handed students in the class.  All the advice I’ve ever read about teaching lefties to crochet is that you should sit across from them and have them mirror your actions, but that was *not* working for these students.  In the end, I switched hands and taught myself to crochet left-handed at the same time I was teaching them.  This had the added benefit of giving me a lot of empathy for how difficult it is to hold everything properly and remember which way to move the hook.  It’s funny how you forget how weird crocheting really is when you’ve been doing it for about half your life!

By the end of the first session, everyone had added a row of single crochet to their swatch, and most people were saying nice things about how they were really enjoying this.  Unfortunately, that’s the point where we hit our first snag.  They started asking me how they could practice before our next meeting.  They hadn’t been taught the steps for starting a new crochet project yet, which meant they could only work on their swatches–but the swatches had limited yarn attached to them.  The only way they could practice was if they wanted to take their swatch home and keep ripping out and redoing the same rows over and over.  Only one person chose to take their swatch home with them.

The next week, we hit our second snag: SUNY Oswego wasn’t holding classes that day.  Only two people showed up to class (one very late), and both mentioned they hadn’t been sure we were still going to meet that day.

The third week, I got the same two new crocheters back again, plus some people who hadn’t signed up for the track originally.  I hadn’t intended to allow drop-ins, but attendance was so low that I was able to work them in.

The fourth week, I only had two of my original attendees present.  They were both making good progress on their scarves, but everyone else had dropped out.  I did have a few more walk-in attendees, including one repeat from the week before.

Attendance was definitely an issue.  I should have been more careful in selecting my dates!  I think a lot of momentum that might have kept people coming was lost due to the combination of not being able to work on their project immediately after the first session, plus believing that the second session wasn’t happening.  By the third week, I was sending out email reminders about crochet sessions, but the momentum was gone.

It’s also possible that not everyone realized they were signing up to come to all four sessions.  If I were designing my flyer and form again, I could make it much more explicit that each session builds on the last and you should expect to come to *at least* half of the sessions if you want to be able to finish your project.

The attendance debacle also taught me that I don’t care for crochet swatches as a method of teaching new crocheters.  Maybe it works for some teachers, but I believe it would have been better to get everyone actually working on their scarf asap.  That way they could have held their progress in their hands, taken it home to work on, and already have enough invested in it that maybe they would have come back for the rest of the track.

Another thing I learned is that good assistants make a *huge* difference.  I wouldn’t have survived that first session on my own.  Even after that, with much lower attendance, it was nice to be able to have multiple experts in the room to offer lots of feedback, encouragement, and advice.

Speaking of encouragement–at least half my role in teaching people to crochet was being a cheerleader.  Many new crocheters couldn’t see how much they were doing right unless I was very vocal in pointing out their progress to them.  It’s easy to forget how foreign, awkward, and difficult a skill like crochet feels when you first try it.  Learning to crochet left-handed gave me a lot more empathy for what these new crocheters were going through!

In the end, I had four “graduates” of this track who I believe will be able to complete a scarf.  Three of those graduates were not actually signed up for the track.  This isn’t the success rate I was hoping for, but I’m cutting myself some slack.  This was the first attempt at a maker track at our library, and no one knew what to expect.  Plus, the actual investment we put into this track ends up being maybe $30 and some enjoyable staff time.

What’s more, I actually got one outcome that I hadn’t expected but am very excited about: The staff member who assisted with the track was working on her scarf and talking to other staff members at lunchtime.  That drummed up so much interest that we’ve already started a library faculty/staff only crochet track.  Our library is just big enough that you don’t necessarily know the people outside your work silo very well, so I’m enjoying the opportunity to expand my network to other parts of the library.  So far attendance is going much better than that first, public track’s did.  I can tell already that I’m going to have a much, much higher “graduation rate” at the end of this track.

Have you tried leading courses/tracks to get people really digging into a particular skill?  I’d love to hear what you taught and how it went.  Tweet @makerbridge or leave a comment!