Given current events and Sharona’s last post, I wanted to revisit my 2014 post “Craftivism – Activism for Makers.”  Craftivism is having a moment in the spotlight because of all the pussyhats so many people knit for the Women’s March a few weeks ago.  For the record, here’s my pussyhat: 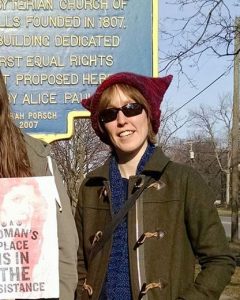 As a knitter, there was something irresistible about this project.  It kept me focused on my goal of attending a march (wearing my hat!) and following through by contacting my representatives repeatedly.  It made me feel like I was part of something bigger than just me.  The author of “Say you want a revolution? Get into crafts” captures many of my feelings well when she says, “The thing which appeals so much to me is that the experience of crafting for a cause or an idea is energy-giving, rather than energy-zapping.”

The BBC posted a fantastic article in January looking at pussyhats and the tradition of craftivism.  It’s a good read–you should check it out.  They bring up great international examples like the Revolutionary Knitting Circle and the HombresTejedores, who both use knitting as a form of protest.

Knitting/crochet protests usually seem to take the shape of a knit-in (everyone brings their knitting to a sit-in, basically), or yarn bombing.  The cover photo for this post is an image of a yarn-bombing project by Yarn Bombing L.A., where they made a piece in support of Black Lives Matter.  Here’s the coverage in the Los Angeles Times.

However, here’s a knitting/crochet group in Indiana that protested local logging by creating a “Web of Life.”  They used yarn to connect trees, “represent[ing] the interconnectedness of trees and their central role in the ecosystem.”

Plus, there are knitting groups that grew out of the need for collective action.  The Yarn Mission is a fantastic sounding group that describes itself as “a knitting collective that is purposefully Pro-Black, Pro-Rebellion, and Pro-Community for the achievement of Black Liberation.”

Other crafts are in on the act, too–last year the University of Massachusetts Native American Student Association and the UMass Fossil Fuel Divestment Campaign protested the Dakota Access Pipeline (DAPL) with activities like making buttons and t-shirts.  They sold what they made and sent the proceeds to the protesters at Standing Rock.

Quilters are in on the action, too.  Quilt For Change lists their mission as “To raise awareness on global issues that affect women and empower quilt artists to become agents for social change.”  Quilters are creating a lot of powerful pieces: check out the top image in this Los Angeles Times article about quilts that deal with racial injustice and more.  Seeing those words stitched into a quilt just hits you.

And if you want to stay up to date with all things craftivism, Betsy Greer has a craftivism blog.  Definitely worth a look.

There are so many cool craftivist projects out there!  Have you made any, either on your own or with your students?  Drop a comment or tweet @makerbridge; I’d love to hear about it!