This past week, I was lucky enough to attend the very first New York State Maker Summit, held in Albany, NY. This one-day gathering brought together makers from all across the state (seriously, all across the state–check out the map above!) to share, network, and create the beginnings of a community.

If you weren’t able to attend or you’re interested in what went on, be sure to check out the #NYSMakers hashtag on Twitter, as well as the shared documents from the conference, including slides and links to useful resources. There’s a ton of stuff to sift through, but it’s definitely valuable. Other ways to connect include Slack, a Twitter account, and a website which right now has conference information, but will soon be transitioned into a resources site. 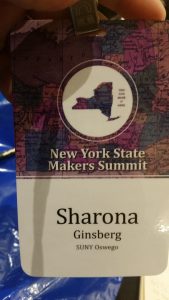 My personal favorites of the panels I attended were the Diversity in Making panel and the one that covered how to plan and run your own large-scale maker events. Regular readers of MakerBridge will know diversity in the maker movement is a topic of enormous importance to us, so I was really excited to not only see a panel discussion, but also to hear diversity and inclusion brought up at various points by various people throughout the day. Although it’s an issue far from being solved in New York or in the movement as a whole, it was good to hear it being acknowledged and seriously addressed.

As my own maker work involves planning and executing a lot of maker events for my library, I enjoyed hearing about all the creative things people have done in their communities, from Mini Maker Faires (Poughkeepsie and Mohawk Valley) to Ithaca’s Wizarding Weekend, Troy, NY’s Enchanted City steampunk-themed event, and POrtal Burn, upstate NY’s Burning Man. While I’m not anywhere near being able to run a city-wide event right now, it gave me something to shoot for and dream about. I also got to hear about the work of Mario the Maker Magician, who is just really cool.

Some other important takeaways for me came from the morning opening remarks and keynote. The ratio of teachers/educators/librarians to industry/entrepreneur-type makers was very interesting; I’m used to seeing a real focus in the maker movement on entrepreneurship and was surprised to see it outweighed at the Summit by a focus on education. Of course, both have their uses and benefits, but I am glad to see maker education growing so rapidly and in such big ways.

The keynote speaker was Andrew Coy, the former Senior Advisor for Making in the White House under President Obama. I liked the idea he put forward of “creative confidence,” which reminded me a lot of the “creative literacy” I’ve always connected with libraries and making. I liked that he explicitly emphasized many types of making, not just the flashy and high-tech options that are often the mainstream representation of the maker movement.

One of the most important points he made, though, was to declare that although we have national problems, we’re going to have local solutions. This speaks so much to the very core and spirit of the movement: makerspaces are community-grown and community-focused, and at their best, they move power from huge corporations and manufacturers to individual creators and makers. They are so much about empowerment on a local level. Although it often seems like the national problems we face are insurmountable and overwhelming, grassroots efforts can and do make a difference. I think that coming together with other New York makers to form a  community for the first time really brought this home, and I’m excited to see how the NYS Makers continues to develop.

Did you attend the NYS Maker Summit? What were your thoughts? If not, do you have similar local groups or gatherings? What do you do to connect with other makers in your area? Share your comments with us below or on Twitter–we’d love to hear from you!

Image Credit: The photo of the New York State Maker Summit map was taken by Dr. Rich Hughes and is used here with permission.