Our guest post this week comes from Jennifer Noble, a graduate student at the University of Michigan School of Information who is studying to be a librarian. The post is a review of the book The Maker Movement Manifesto by Mark Hatch and was originally posted on Jennifer’s blog. You can also find her on Twitter.

After hearing some interesting discussion of this book in class, I decided to read and review Mark Hatch’s The Maker Movement Manifesto. Hatch co-owns TechShop, a makerspace chain, and has a background in both the Special Forces and business, and all of those identities play a major role in the themes present in this book.

The most prominent theme in this book is the accessibility of maker culture, at least to those in the middle class. Hatch acknowledges the classism in making early on in this text, saying that  “almost anyone can make” in this day and age (10, emphasis mine), but much of his message is directed at those in the middle class with some discretionary income. He encourages those people to join a makerspace and take a chance on learning some new skill or tool instead of using their disposable income on fancy coffees or golf trips, specifically referring to these exhortations as “radicalizing” multiple times throughout the book. It is at these moments when his Special Forces background is most apparent – I could easily hear a drill sergeant yelling whenever Hatch started extolling the benefits of making and asking what was holding me back from participating. 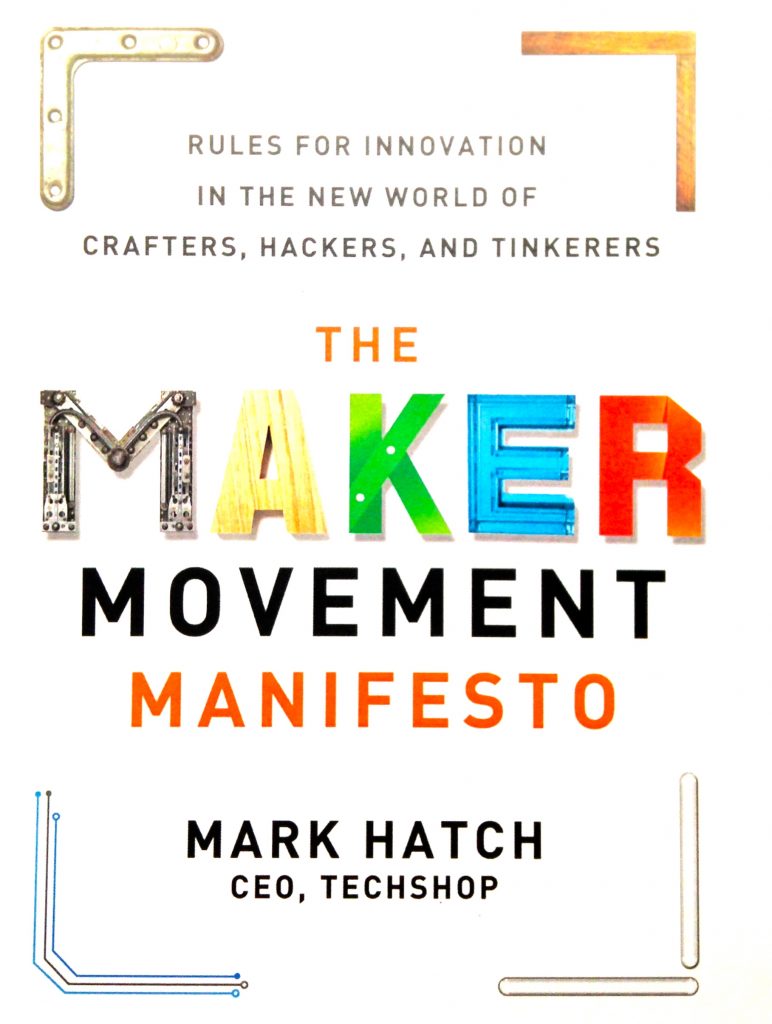 Hatch also focuses a lot on the entrepreneurial aspects of making, which, frankly, frustrated me. While I appreciate the job creation that can and has come with making, almost every maker Hatch profiled in this book eventually started their own company, an end goal that likely is not shared by all makers. To be fair, Hatch does talk about the pride that comes from making an item and the meaningfulness of gifting handmade items to loved ones, but the majority of the text focuses on the economic benefits of making, which felt somewhat antithetical to Hatch’s personal maker manifesto. I know it is possible for a maker to “share,” “give,” “play,” (1-2) and start a wildly successful business, but I don’t know if putting all of those concepts in the same text is the best narrative structure.

The last of Hatch’s major themes centers around making as the way of the future. Hatch relates the maker movement to the industrial revolution, claiming it democratizes access to tools and information, and access to tools and information will help people “pursue and achieve their dreams” (121). He also shares his belief that tools such as 3-D printers will become so common that children will receive them as Christmas presents and be inspired to become makers themselves after playing with that technology. While I personally am uncertain about how widespread making will become as an economic pursuit, I agree that inspiring people to work with their hands could lead to a future where people are encouraged to explore ideas and build cool, useful items, especially if makers are supported from a young age.

Overall, I think The Maker Movement Manifesto is most appropriate for middle class readers who are interested in learning about either becoming a maker (especially if they are interested in how making relates to business) or the more high-tech products that have come out of the maker movement. I would not recommend it for anyone interested in low-tech making or profiles of diverse makers.