Our guest post this week comes from Will Hopkins, a graduate student at the University of Michigan School of Information.Through interviewing his father, Will gains insight into a life of making and what it is for an individual to be a maker. This post originally appeared on Will’s blog, Makerspaces. Learn more about Will on his website.

For my maker interview, I decided to interview my dad, Mark Hopkins. As someone who taught me and participated in much of my early making, I wanted to learn about his perspective on our family making, as well as to investigate his process as a maker. Now retired, he is working on exciting new projects that put making center stage.

I also want to note I think this interview largely leaves out an important figure in our family making: my mom. Because such an omission isn’t intentional, it’s all the more important to call it out. She taught me baking and early sewing, did the physical and emotional labor of taking me to events, and made art a constant presence in our household. I think an interview with her would be equally interesting and illuminating, and I hope to do one for my own purposes after the semester.

One of my earliest memories is of seeing my dad’s face on a billboard. I believe we were driving to the airport to fly to Spain, where we’d live for the next few months while he worked on setting up a new factory. As we drove up I-95, we saw his face staring down at us. At the airport, we saw him again, staring at us from an ad. Around the same time, a TV crew interviewed him at our house for a PBS special on inventors. To me, my dad has always been a bigshot inventor.

Equally early memories include riding in antique cars with him, shooting model rockets into the sky, and riding our bikes everywhere. Throughout my childhood, my dad helped me with Science Olympiad, where we built bridges and trebuchets, and taught me how to apply science to rocket-building. But his story of making goes farther back.

In the summer of 1963, dad learned to ride a bike. Not far from where my parents live now in Newark, DE, he started by coasting down a hill at the old farm with his cousins and uncle. Despite how fraught with disaster learning to ride a bike usually is, he doesn’t remember falling over (though he admits he may simply have forgotten). Later, in 1970, he was living in Kitchner, Ontario and got his first ride on a ten-speed bike. “I remember the street lights and the wind in my hair,” he says. That ride helped set the course of his life.

My dad has always been the quintessential maker, to me.

My dad doesn’t know much about the maker movement, but it’s still a label he’s comfortable claiming for himself and he’s interested in learning more about the larger movement. “I just started reading Free to Make, and I’ve heard the term, certainly. My initial impression is that it’s about getting people to see themselves as people who can build things…There’s something valuable in building – commercially, or because it’s new, or just to practice something. My mom knitted, and she did it because she liked to. She was a maker.”

My grandparents were major influences in my dad’s childhood making. My grandmother spun yarn, knitted, sewed, and quilted. She was also an avid gardener who would have been fascinated by the possibilities of Arduino soil sensors. My grandfather actually assembled an entire antique car in his basement in Lansing, only to disassemble it, take it outside, and re-build it when the weather turned fair.

My grandfather often took my dad and uncle to model rocketry meets. My dad initially started building kits, but quickly got into competitions in which he had to design and build the rocket himself from scratch. The competitions would often have very specific competitions, such as carrying a payload, so the rockets would need to be purpose-built.

The rocketry meets were ideal for a child raised in the burgeoning space age. Many of the participants worked for NASA, and the meets were often held at NASA or military sites. My dad would never miss an actual NASA launch, either. He watched on TV or listened on the radio whenever possible. 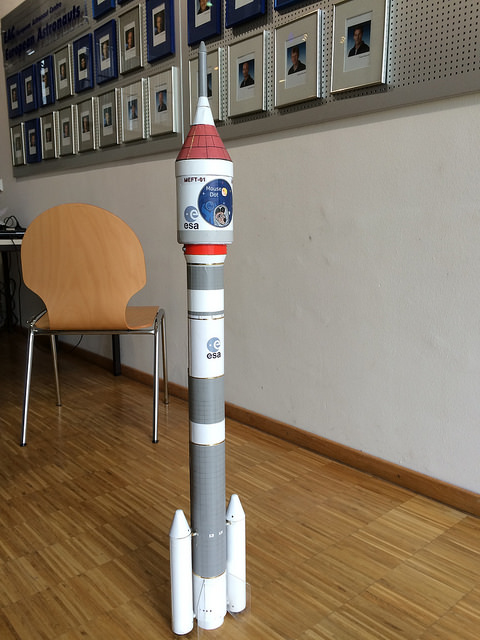 Rocketry meets were major undertakings, but they were organized before the Internet (though some participants were likely using ARPANET, given the heavy NASA and military presence). Enthusiasts read rocketry magazines and joined local clubs, much like the science clubs of Onion’s Innocent Experiments, through which they were connected to the larger rocketry community.

Shortly after he learned to ride a bike, my dad started making his own bike wheels. With the benefit of Richard’s Bicycle Book and a class at a conference in Carlisle, PA, he began making and replacing his own spokes and rims as necessary. While studying engineering at the University of Delaware, he and a group of fellow cyclists decided to make a human powered vehicle to enter a land speed competition.

The team was sponsored by Campangolo, still a major bicycle parts manufacturer, and they learned the technical skills they needed from a local bicycle store called Two Wheeled Cycle. The vehicle reached 52 mph with three riders powering it. They competed against companies like General Dynamics, which actually hired professional riders to power the vehicle.

Later, as a young engineer in DuPont’s field program, he joined the composites business. DuPont had bought Exxon’s satellite parts division, and wanted to start making their own parts. After visiting a bicycling trade show in 1987, my dad convinced his manager that the bike industry was ripe for a new parts manufacturer. Specifically, he decided to try making a new bicycle wheel. He and his collaborators had some ideas for a more aerodynamic design that used three spokes and looked like an airplane propeller.

Initially, no one could understand how the wheel was supposed to work. They couldn’t visualize how it would work, or how the force would be distributed. So one night, my dad and his collaborators sketched a design on his plywood workbench and cut it into what would become their prototype (he still has it). When I asked him how long it would have taken to produce a more traditional prototype, he reminded me that they didn’t have the institutional support at that point to actually produce a prototype. They were able to fabricate one out of wood, when a full prototype would have taken weeks once it was approved.

The wooden prototype was key to the project’s success. With the prototype, made by hand out of a table, my dad and his team could excite their managers about the project and bring it to fruition. The wheel is still in use today in time trials in the Tour de France and other major races. 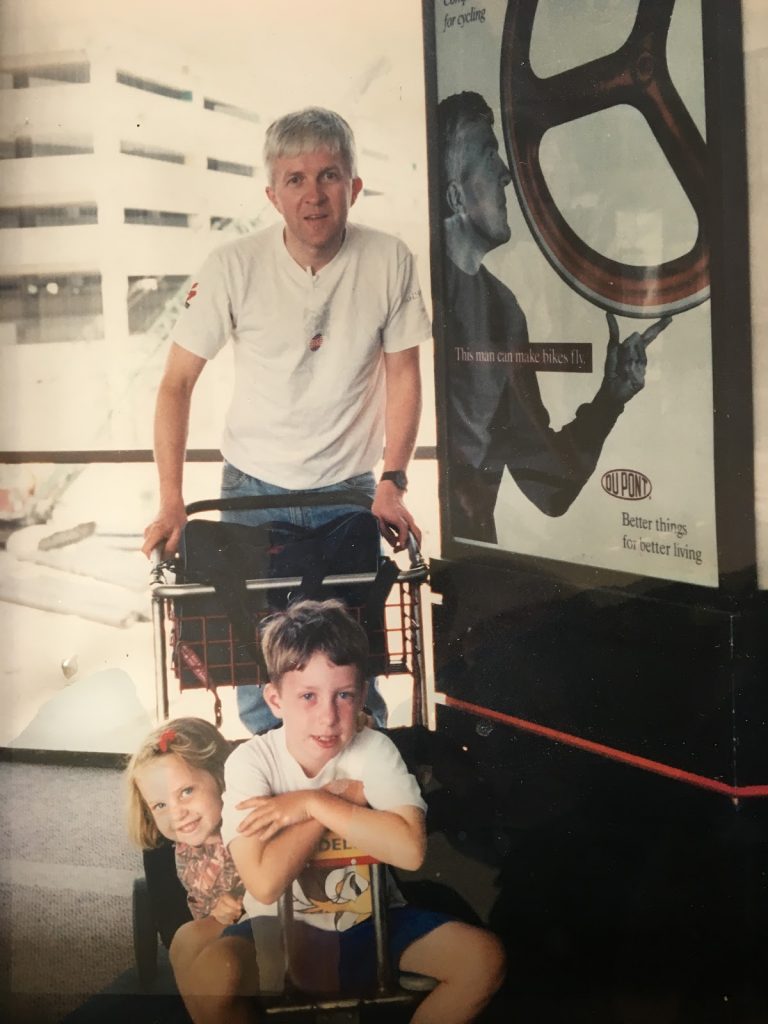 Now, almost thirty years later, my dad is returning to making bicycles. He started working for a company called 3T about 18 months ago, and about 15 months ago started laying out a new plant for them to begin making bicycle frames and parts. In the intervening years, he’s learned new skills, like supply chain optimization, and he’s hoping to achieve something called slow manufacturing with this new plant. It reduces waste, has a smooth single-directional flow, and raw materials go in one end with finished parts coming out the other.

Beyond bikes, my dad also makes household items that he needs, like re-covering kitchen chairs, and parts for antique cars. The cars, originally built in 1914 by the Overland company, don’t have parts you can pick up at a dealership. The wheels are wooden and the driver’s seat cushion has to be lifted up to fill the gas tank beneath it. Actually driving the vehicles requires brute physical strength due to the lack of power brakes or steering. If something breaks, as often happens, it has to be repaired or fabricated with what’s on hand.

I asked my dad specifically about the making that he taught me as a child. He said he never really thought of it that way. He was just playing with me, teaching me some of the things that he learned and enjoyed during his own childhood. My LEGO sets might be a little different (I still build Star Wars LEGO today) but at their core they are still the same imaginative construction sets my dad built with.

My dad has always been the quintessential maker, to me. I feel fortunate I’m able to interview him and interrogate our shared history of making.

The photo of Mark Hopkins in this blog post originally appeared in Will Hopkins’s blog and has been shared under a CC-BY-SA 4.0 license.

“Ariane 6 model rocket” by ESA_Events is licensed under CC-BY-SA 2.0