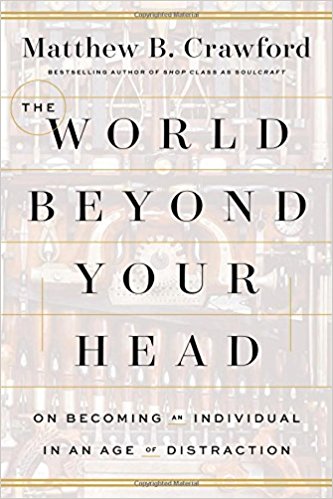 Our guest post this week comes from Nicco Pandolfi, a Master’s of Science in Information (MSI) candidate at the University of Michigan School of Information. In this post, Nicco explores Matthew Crawford’s book The World Beyond Your Head: On Becoming An Individual in the Age of Distraction and what Crawford’s observations might say about the maker movement’s approach to technology and machines.

Are freedom and agency rooted in an unfettered sovereignty of the self that is impervious to one’s environment? Or do they emerge as a result of disciplined pursuit of mastery within a specific context?  In The World Beyond Your Head, philosopher-craftsman Matthew Crawford offers up an incisive and timely inquiry into the layered relationships between individual will, cultural authority and our besieged faculties of attention in an age of calculated distractions. Although he does not write with a capital-m Maker audience in mind, his observations prove fertile ground for a discussion of the role of attention in making, and the role of making in communities and education.

We are living in an age, Crawford argues, driven less by the information economy than the attention economy.

The book opens with an examination of the ways in which the contemporary public landscape is designed to capture our attention, usually as passive consumers of advertisements. We are living in an age, Crawford argues, driven less by the information economy than the attention economy. This makes intuitive sense in a cultural moment that provides daily reminders of the disparity between informational abundance and attentional scarcity. He takes pains to assert that there is nothing inherently new about this phenomenon, rather it is a logical outgrowth of the interaction between long-held Enlightenment ideals about individual autonomy and an erosion of the authority of cultural institutions which shape and structure human choice. It is within this framework that Crawford proceeds to wrestle with the cognitive and cultural dynamics that shape the ways we attend to the material realities of our world.

Early on, Crawford introduces an image that serves as a kind of distilled parable version of the book’s key argument. The image is that of the Handy Dandy machine, a relative newcomer to the cast of characters on Mickey Mouse Clubhouse. The Handy Dandy machine is a paradox, for although Disney intends it as a liberating and magical wonder of technology (a machine that enables the user to do anything!), Crawford notes that in truth it serves as an abstracting intermediary that reduces a physical world of differentiated actions into an array of homogenous tool avatars. The implication is clear: the need for children to contend with the constraints of a material environment is becoming passé. This is thrown into sharp relief when Crawford contrasts the untethered, floating world of the contemporary Clubhouse with the slapstick world of Tom and Jerry, in which harsh material reality lurked behind every corner. Does untethering ourselves from a world of physical environments and material constraints constitute any kind of liberation at all, or are we witnessing helplessness masquerading as agency? Crawford favors the latter view, pointing out that attention stems from the Latin root tenere meaning to stretch or make tense, an action which requires a connection between two concrete points.

The implication is clear: the need for children to contend with the constraints of a material environment is becoming passé.

In The World Beyond Your Head, we visit short order cooks, hockey players, motorcycle racers, glassblowers and pipe organ makers on a quest to understand the social and psychological dimensions of attending skillfully to our environments. Usually, as Crawford highlights, mastering a skill requires us to first submit to some type of cultural authority; craft demands it. Only after deferentially subsuming our individualistic will to the constraints of a craft–and, often, the experience of a teacher–can we eventually attain what Crawford calls an “earned independence of judgment,” the right to judge merit and construct unique expressions within the context of a skilled tradition. Paradoxically, only by subsuming oneself to the mores and cultural authority of a community of practice can one achieve meaningful independence.

Chapter titles such as “Virtual Reality as Moral Ideal,” “On Being Led Out,” and “The Erotics of Attention” let the cat out of the bag that this is, at its core, a philosophical text. Kant and Descartes are key players throughout, and guest appearances are made by Heidegger, Kierkegaard, Hegel, Locke and de Tocqueville. These hallowed names are joined by a host of more recent thinkers in fields ranging from cognitive psychology to economics. Yet to leave it at that is to ignore Crawford’s gift for inviting a lay audience to the table and engaging with them fully. As he did in Shop Class as Soulcraft, here he demonstrates a deft and practiced ease in demystifying weighty philosophical currents of thought and grounding them in familiar contemporary settings to make his point. He also has a real knack for coinage and the book is brimming with great nuggets like, “pliable choosers,” “cultural jigs” and “ecologies of attention.” These terms are not deployed willy-nilly but carefully chosen to build a shorthand particular to the arguments of the book.

Reading Crawford through the lens of its implications for the maker movement yields several compelling questions about the goals of making and the relationship between makers and technological intermediaries. Interestingly, the glassblowers and organ makers he visits use advanced computer tools to some degree in their design process but when it comes to the act of making itself, they place great importance on involving themselves as directly as possible. For them, in other words, intermediary technology has a role to play in articulating ideas but not in executing those ideas. Naturally, as digital technology continues to improve, the quality of work done by machines will be of higher and higher caliber. However, to introduce a tool between a skilled maker and the object of their making which mutes key stimuli is antithetical to the argument Crawford makes for an ethics of attention.

While Crawford does not explicitly address 3D printing or the use of CNC milling machines…these tools, while useful in their own right, do not foster the kind of attentive engagement and agency he is advocating.

By way of analogy, he offers two contrasting cases. One is a cook whose knife acts as a bodily extension through which they can perceive fine distinctions about their environment. The other is a driver engaging the brakes of a modern car which has been designed so that the driver’s foot perceives not the mechanical sensation of the brakes, but an electronically generated resistance triggered by a sensor. In the former case, the cook is able to attend directly to the texture of their ingredients and make judgments rooted in years of iterative practice and observation. In the latter, the driver is experiencing an abstract kind of mimicry.

While Crawford does not explicitly address 3D printing or the use of CNC milling machines, it is not hard to imagine him arguing that these tools, while useful in their own right, do not foster the kind of attentive engagement and agency he is advocating (recall the specter of the Handy Dandy machine). While there are concrete skill sets associated with learning to use these kinds of tools, they rely on the abstraction of computer code and cede the makerly stage of their craft to computerized machinery. That said, the maker community displays many characteristics which Crawford extols as hallmarks of agency, namely the simultaneous engagement with objects and other people, the discipline involved with getting acquainted with your tools and materials and their limits, and the importance of respecting authority for both one’s own safety and one’s development of key skills.

The tension between these considerations raises intriguing questions for maker advocates. Are artisanal making and computer-assisted making cognitively different activities? Is computer-assisted making at odds with Crawford’s ethics of attention? How important is execution compared to design in a capital-m Maker project or ethos? These are questions for another book, but there is no doubt that with this one, Crawford delivers a timely and thoughtful discourse on several existential questions of our time.