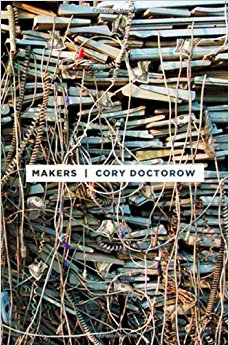 This week’s guest post is a review of the novel Makers by Cory Doctorow written by Thao Huong Nguyen, a Master’s of Science in Information (MSI) candidate at the University of Michigan School of Information. Learn more about Huong here.

This book is, I think, as close as we can get to someone from the maker movement actually coming out and outlining their vision for a better world. Not that Doctorow’s vision is utopian and perfect, because gradually and block by block, the vision is compromised and complicated; but that the vision contains all the necessary elements: of how people perhaps would like to live, of how the world should perhaps be organized, of what values, in this newly organized world, that people perhaps should hold.

By far the most valuable thing we get from Makers is this vision, because aesthetically speaking, the book is a snooze. It has C- prose, C- characters, and D+ imagination. I confess I am unused to reading science fiction, but I can’t think that they all have so limited literary ambition that their writing style fits seamlessly into tech companies’ marketing copies. The character work here is also so detailed and diverse that every male character falls in love with Suzanne, the female journalist. Only the villains ever see the world differently, but even they do not go so far as to follow a religion or something, because that would be outside of the imagination of this book.

So all that remains is the vision of a better world. In it, big manufacturing companies like Kodak and Duracell (combined into “Kodacell”) become mass scale incubators, hosting tens of thousands of entrepreneurs who would invent things, sell a couple hundred thousand or a million units, and move on to the next thing. They would be forced to move on because others would be able to manufacture more cheaply and more efficiently, and because they would have put the plans out there for all to see.

Very few people can churn out innovation after innovation, and even then, they would probably enjoy some kind of financial security  that does not depend on a very complex economy enthusiastically receiving their ideas.

Even though Kodacell eventually went bust in a dot-com-like bubble, our main characters, comprising of one such entrepreneur group, always look back to this period with suffocating nostalgia. The book might not present Kodacell as a sustainable business model, but it’s how the book suggests people would like to live, the kind of existence that would be the most fulfilling. One invention from our main characters sparks off a “New Work” movement, powered mostly by 3-D printers and of which one in five Americans is part.

“New Work” models itself after the New Deal, of course, neglecting to mention that the real New Deal was less a bubble and more a path to economic recovery that has had incredibly lasting impact on the lives of Americans and has midwifed an entire generation of artists and activists. “New Work,” on the other hand, is the definition of precarious employment and the capitalist wet dream. Very few people can churn out innovation after innovation, and even then, they would probably enjoy some kind of financial security  that does not depend on a very complex economy enthusiastically receiving their ideas. Better invest in a diverse portfolio, I guess. (“[A]n undiverse portfolio was flat­out irresponsible,” comments one of our main characters.)

The last two-thirds of the book articulate a very libertarian/anarchist way of organizing the world, but does admit that such a structure is not very good at responding to external events or at compelling its members to perform collective action. This is also where the main plot devolves into a protracted court battle over trademark and copyright, because apparently Doctorow has no other lens with which to view the world. Sure, copyright is part of the manufacturing process, but more important is the problem of high capital, which in the book either goes unaddressed or is conveniently solved by the main characters attaching themselves to one big corporation after the other. Missing from all of this discussion on the organizing structure of society is the government, whose presence is only felt via the police or by meddlesome social workers.

Because the vision Doctorow presents now becomes more ambiguous and messy, we should perhaps look at who he thinks does or does not belong in that world. Sammy, the vice president of Disneyland who has had a teenager beat up to the point of crippling him, apparently still belongs in that world provided he is sufficiently contrite and besotted with Suzanne. The major villain, however, is Freddy, a mud-slinging, snarky, gossipy journalist writing for “Tech Stink,” who is also the only person to receive any kind of comeuppance. In the climax, Freddy was delivered a humiliation on a live broadcast for inaccurate reporting, which coincidentally is the most cliched and atrociously written part of the book that I’m going to submit as evidence for that C- prose grade.

Because the vision Doctorow presents now becomes more ambiguous and messy, we should perhaps look at who he thinks does or does not belong in that world.

But what was Freddy’s sin? He is constantly contrasted with Suzanne,  a journalist turned blogger who helped shepherd in the New Work movement by reporting on Kodacell. Freddy charges that she was captured by the corporate structure and is sleeping with the men (she eventually dates one of them), and questions her hype about the movement. These are all reasonable concerns, especially seeing that for all intents and purposes Suzanne was caught up in the hype, but everything Freddy does is discredited by how slimy Doctorow makes his personality. Later in the book, however, it is made clear that his gravest sin is not his sexism, but his critical posture toward any and all ideas.

Of course, the one thing tech people and the greater tech blogosphere can’t tolerate is the default skeptical and adversarial stance of true journalists. At the time this book came out in 2012 (ed. note: the book was actually first released in 2009), there already existed a bustling economy of tech blogging, including sites like Gizmodo and The Verge, not to mention Doctorow’s own Boing Boing, which cover tech and gadgets and are mostly the PR arm of Silicon Valley. The lone exception was Valleywag, famous for endlessly ragging on the excess and the ego and the failure of Silicon Valley, combining an assumed adversarial stance with the gossipy & snarky bent of its parent company, Gawker. In 2016 Gawker was bankrupted and forced to close, thanks to the investment lawsuit strategy championed in Doctorow’s book. Boing Boing has criticized the lawsuit, so this is not a swipe toward Doctorow himself. I am just using this book as a temperature test for the general attitude of the tech and the maker communities in general. I want to understand their politics and their postures and their world views, whether or not they have an ideology, whether or not that ideology is libertarian, and the dystopian places to which that ideology will lead.

I will contend however, that this particular work is more about the ideas than it is about the characters or anything else.

Ultimately, measuring how much a fictional work’s politics matches with your own is not a great way to review a book, much less to read it. I will contend however, that this particular work is more about the ideas than it is about the characters or anything else. I would have preferred a collection of essays or other non-fiction, argumentative forms as a vessel for these ideas, because I’ve also listened to a Doctorow talk, and thought that he was more suited to it. In the narrative fiction format, Doctorow’s ideas are too messy and non-committal, despite didactic dialogues and numerous grandstanding moments that require characters to make moral decisions. Read this book, I guess, only if you want a window into the maker movement’s vision of a better world.