Natasha Singer wrote a few weeks ago in the New York Times about the impact Silicon Valley is having in and on public education. This is part of an ongoing series that I’ve been waiting for some time for someone outside of the tech and education bubbles to bring up. Singer’s article focuses on Code.org, the non-profit group supported by over $60M in industry support to bring its computer science curriculum into the nation’s schools.

Before you read the article, here is some of what isn’t covered in it. The article sidesteps the question of whether we need a nation of coders or merely a more diverse yet robustly-prepared niche pool. And it also doesn’t discuss whether current administration plans to curtail immigration (an outsized proportion of Silicon Valley executives being not born in the US) will create a gap that will need filling by US programmers — a scenario in which the industry might not need more people to do the work — which would be captured in labor statistics — but American-born people to do it — a nuance that would not be captured there).

It also does not raise whether we need a larger quantity of coders in the future, and I think that is critical to mention here before you read the article, because a big piece of the puzzle here is what our need really is, from a personal or industry perspective. How do we know that there’s a need for more programming? Take a look at the Bureau of Labor Statistics’ 2016 Fastest Growing Occupations graph (click the link below if you find the graphic below too small to read): 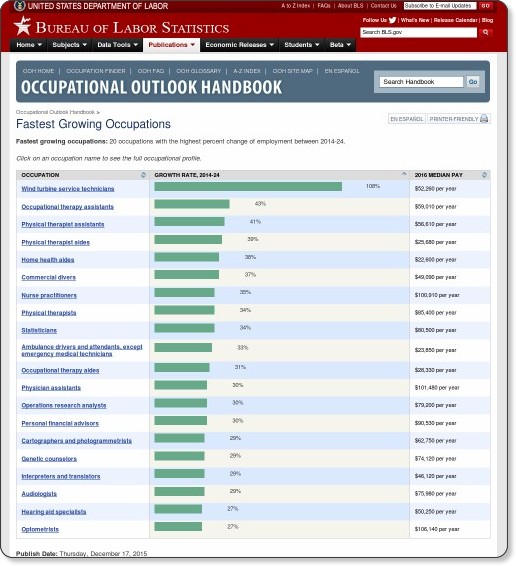 Most of the jobs with the greatest predicted growth shown above are about health care, not technology. This complicates the perspective I often hear that tomorrow’s employees will be a nation of computer programming folks. So if the job of school is — as we’re hearing increasingly throughout conservatives’ redefinition of the purpose of K-12 and higher education — we should be infusing school with wind turbines (technicians for which have been predicted to be the largest-growing occupational sector) and vocationally-focused health care programs, not computer science, right?

If, as pundits say, we need coding for all because there is going to be an unfilled need in for computer science specialists in the future, why isn’t that need showing up in the statistics? (Here is where I pause to say that my personal take is that we all need just enough under-the-hood programming experience to know that there is code under the hood of the tools we use every day and to have some skill in making tweaks … so I don’t want you to think I’m being a Luddite. I’m more questioning whether Silicon Valley is starting to play an outsized role in influencing public perception of need.)

The other reality is that whether your district adopts GSuite (a tool most of us do love, to be honest), a Code.org curriculum (there’s a ton of great stuff in there, and the visual nature and incorporation of Disney characters really appeals to kids), or something else, American education is significantly changing due to Silicon Valley — what other industry is placing such a significant stamp on American education? And where are all the health care industries clamoring to plunk its money into related public education curriculum and training initiatives?

At a White House gathering of tech titans last week, Timothy D. Cook, the chief executive of Apple, delivered a blunt message to President Trump on how public schools could better serve the nation’s needs. To help solve a “huge deficit in the skills that we need today,” Mr. Cook said, the government should do its part to make sure students learn computer programming.

“Coding,” Mr. Cook told the president, “should be a requirement in every public school.”

The Apple chief’s education mandate was just the latest tech company push for coding courses in schools. But even without Mr. Trump’s support, Silicon Valley is already advancing that agenda — thanks largely to the marketing prowess of Code.org, an industry-backed nonprofit group …

In a few short years, Code.org has raised more than $60 million from Microsoft, Facebook, Google and Salesforce, along with individual tech executives and foundations. It has helped to persuade two dozen states to change their education policies and laws, Mr. Partovi said, while creating free introductory coding lessons, called Hour of Code, which more than 100 million students worldwide have tried.

Along the way, Code.org has emerged as a new prototype for Silicon Valley education reform: a social-media-savvy entity that pushes for education policy changes, develops curriculums, offers online coding lessons and trains teachers — touching nearly every facet of the education supply chain …

But Code.org’s multilevel influence machine also raises the question of whether Silicon Valley is swaying public schools to serve its own interests — in this case, its need for software engineers — with little scrutiny. “If I were a state legislator, I would certainly be wondering about motives,” said Sarah Reckhow, an assistant professor of political science at Michigan State University …

Mr. Partovi, 44, said he simply wanted to give students the opportunity to develop the same skills that helped him and his backers succeed …

Even so, he acknowledged some industry self-interest. “If you are running a tech company,” he said, “it’s extremely hard to hire and retain engineers.”

Code.org is now one of the largest providers of free online coding lessons and more comprehensive computer science curriculums. It has also provided training workshops to more than 57,000 teachers, Mr. Partovi said.

The rise of Code.org coincides with a larger tech-industry push to remake American primary and secondary schools with computers and learning apps, a market estimated to reach $21 billion by 2020.

Last month, Apple introduced a yearlong curriculum for high schools and community colleges to teach app design in Swift. Apple has also supported Code.org by hosting the group’s popular Hour of Code events in its stores …

Together with local groups, Mr. Partovi said, Code.org and Microsoft have helped persuade 24 states to allow computer science to count toward math or science credits required for high school graduation. Along with groups like Black Girls Code, Girls Who Code and Latina Girls Code, Code.org has worked to make the subject accessible to a diverse group of students.

But the movement has also supported legislation that could give companies enormous sway in public schools, starting with kindergarten, with little public awareness.

It’s also fascinating that this article runs contemporaneously with the ISTE conference but without mentioning it. On a somewhat tangential note, I’ve long been uncomfortable that so many ISTE sessions hinge on educators spending their own money to travel to a conference to do free promotion for a for-profit tech tool.

What do you think?