The past week has left me feeling dissatisfied with the world, and thinking I ought to do something about it. I’m not much of one for shouting or joining loud, noisy groups, but I am a maker and a crafter. As a result, craftivism appeals to me.

If you haven’t encountered it before, craftivism is defined by its creator, Betsy Greer, as:

Craftivism is a way of looking at life where voicing opinions through creativity makes your voice stronger, your compassion deeper & your quest for justice more infinite.

The process of making the craft deeply engages the creator with the message he/she is trying to convey. Then, when the craft is out in the world, it’s an engaging, non-threatening way of getting people to talk about important issues. Sarah Corbett, who founded the Craftivist Collective, also points out,

Often I craft alone or in a small group in public spaces like cafes, train stations and on public transport. And it means people are naturally curious & come up to you and say “what are you doing?” and you can say “I’m stitching this issue about inequality – what do you think?” And you engage people that way. So you are getting out into the world of non activism bubbles but still talking to people about those issues. Because craft is involved, it’s not scary: people naturally come to us and ask us what we are doing, they tweet pictures of us, stick it on instagram, pinterest etc. (from her recent TEDxBedford talk) 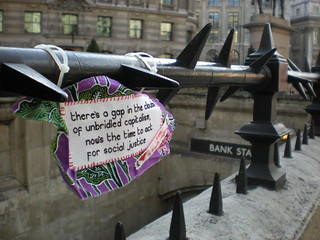 Mini protest banners are small, embroidered cloths highlighting an issue and meant to be hung in a public space. They can be a form of protest, education, or encouragement, and are meant to spark discussion. According to the Craftivist Collective:

[By] hanging your banner in public, you engage others in the fight for a fairer, more beautiful world in a provocative but thoughtful way, without them feeling threatened or preached at. 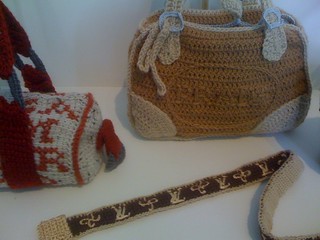 The Counterfeit Crochet project urges participants to crochet copies of designer products, and then carry/wear their “counterfeit crochet” item. This is a way of starting dialog about consumer culture. From the description of the project:

The media machine pushes onto the public the desire for luxury goods. Celebrities tote high-end purses, and slick glossy ads amp-up the sexiness factor. Fashion is fun fun fun! But at the same time, most of us “ordinary people” can’t afford such things, and some even knowingly buy knock-off products to sublimate our desires. If you take the logic one step further, and actually make the item yourself, you are in a sense taking the situation into your own hands without giving a single penny to the company brand. They have excluded you anyway, by keeping their prices astronomically high.

Marianne Joergensen’s tank blankets are an iconic example of craftivism. She was protesting Denmark’s involvement in the Iraq War. Of her work, she says,

Unsimilar to a war, knitting signals home, care, closeness and time for reflection. Ever since Denmark became involved in the war in Iraq I have made different variations of pink tanks, and I intend to keep doing that, until the war ends. For me, the tank is a symbol of stepping over other people’s borders. When it is covered in pink, it becomes completely unarmed and it loses it’s [sic] authority. Pink becomes a contrast in both material and color when combined with the tank.

Of course, you can also come up with your own projects that address the issues that matter to you, using the skills and supplies available to you. I would love to see more schools and libraries encouraging students to engage thoughtfully in social issues, and I think craftivism projects could be one way to do it. Do we have any current craftivists in our audience?

Craftivism Revisted: Pussyhats and Beyond